The standard systems used by MANGRA, S.A. in order to maintain the optimum temperature levels for transferring and dosing the different liquids used in animal nutrition are the bi-tubular system for pipelines (jacketed pipes) and chambers or coils for storage tanks.

In both systems it is necessary to circulate hot water through the pipes, chambers and coils. 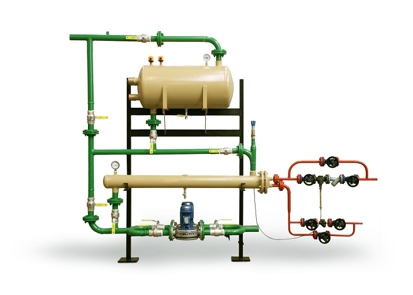 At MANGRA, S.A. for heating the water several heating systems are used and manufactured, among them:

The ELECTRICAL INTERCHANGERS are recipients or water accumulators that have a diameter and dimensions adapted to the quantity of water to be warmed up. The water is heated by means of a certain number of electrical resistances (watts) placed inside the recipient which warm up the water circulating in it.

The TUBULAR HEAT INTERCHANGERS (STEAM/WATER) use the steam exceeding from the steam boilers existing in the majority of feed-mills. In this case like in the electrical interchangers we take advantage of the circulation of steam through the coil and the water is warmed up to the indicated temperature by means of a certain number of thermostatic valves.

On the other hand it must be highlighted that as important is the heating system as the insulation of the pipelines and the storage tanks in order to avoid losses of heat and in consequence save energy. In order to obtain this result fibre glass blankets fixed by means of semi-hard aluminium plate are used and in this way an optimal insulation is granted.